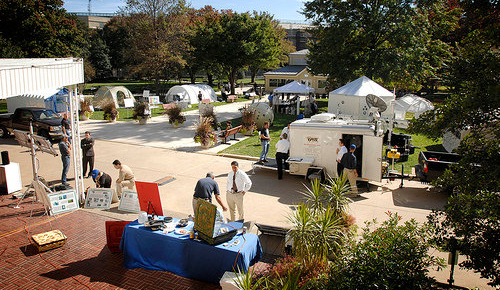 Converging Approaches to Sustainable Resilience: STAR-TIDES’ 14th Annual Capability Demonstration, Virtual, will be held online on October 20-21, 2020, from 11:00 am to 5:00 PM Eastern Time each day.

This capabilities demonstration will be valuable for U.S. and foreign members of the national security, emergency management, and sustainable development communities. It will combine key elements of the previous George Mason and the Pentagon demos. For all audiences the conference aims to let speakers and panelists teach and get their messages out, and help attendees learn from thought leaders and keynote speakers, connect with new leads, and develop them. Exhibitors will have chances to provide information, plus product or service updates and announcements. There will be networking opportunities at several levels via chat and students will have chances to learn about career opportunities.

Each day will include a plenary session from 11:00 am to 12:30 pm Eastern Time (ET) with keynote speakers and panel discussions. The columnist Tom Friedman will be our keynote speaker on the morning of the 20th. There also will be breakout sessions between 1:00 pm and 4:15 pm ET which will include 10 parallel tracks covering different capability areas, which are described below. There will be a daily wrap-up from 4:30 pm to 5:00 pm ET.

Speeches, interviews and most panel discussions will be pre-recorded and presented via YouTube. Where possible, there will be opportunities for dialogue with speakers via chat after their presentations. Chat channels will be available for networking during breakout sessions. Content will be available online during the event and for 30 days afterwards.

We’re working hard to make this an interesting event for a wide range of participants.  Please join us.  Registration will be available shortly via George Mason’s TouchNet.

Since its founding in 2007 STAR-TIDES has been involved in a wide array of real-world events, technology demonstrations, field experiments, and focused projects, sometimes involving teams of network members. Some of the relief efforts STAR-TIDES has supported include Cyclones Sidr in Bangladesh (2007), Nargis in Myanmar (2008), and Pam in Vanuatu (2015); the 2010 Haiti earthquake; the 2011 Great East Japan Earthquake and Tsunami (aka Fukushima); Hurricanes Sandy in 2012, and Irma/Maria in 2017; Typhoon Haiyan/Yolanda in the Philippines (2013), and the 2015 earthquake in Nepal, as well as aid to a damaged medical clinic in South Sudan in 2012/13. Technology demonstrations have been held every year, first at National Defense University (NDU) in Washington, DC, and now at George Mason University (GMU) in northern Virginia. STAR-TIDES has participated in conferences and exhibits from California to Dubai, and in field experimentation, largely at Camp Roberts in central California. STAR-TIDES members also helped manage an award-winning technology demonstration on expeditionary water power and communications.

Network members have investigated civil-military engagement in Iraq and Afghanistan, as well as improving distributed, renewable energy infrastructures.  A “STAR-TIDES Japan” network supports a Japanese Cabinet Office project on Public, Environmental Health, and Disaster Medicine and other international STAR-TIDES networks are under discussion.

From the teams perspective, in 2015 over 80 network members responded in a week to a foreign government request for support to refugee and internally displaced persons (IDP) camps, and other members supported 2018 CAPSTONE project by GMU students on community revitalization in West Virginia with information about innovative shelters.  In the last three months network members have formed a team to enhance rural broadband connectivity, for example in Native American communities and other distributed populations.

Disclaimer – All Information in the STAR-TIDES network is intended to be in the public domain. All Information on this website is free, open source, and in the public domain. Ideas expressed, or products displayed, on the website, or in other TIDES or STAR-TIDES activities, should not be considered as endorsed by anyone else, Including the US government, nor should they be considered any form of commitment.